Spicy and sweet at the same time my great grandmother’s recipe for chili sauce. 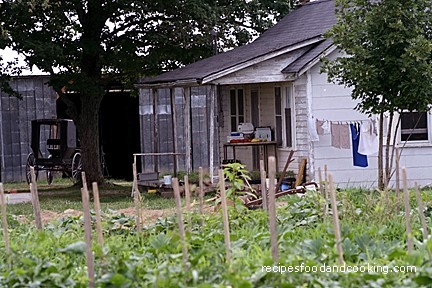 We left on Saturday morning heading out for Lawrenceburg County in TN., Ethridge to be specific, armed with our map of where the homes were that sold vegetables, jams, peanut brittle and so much more. It was easy to tell what they had for sale because out by their mailboxes on the road were signs showing what they had to sell that day. Our first stop was at a house where we bought 5 dozen ears of corn for $2.00 a dozen! It was the best corn I have had in years. While we were there the farmer hooked up his belgian horse to a big box with skids on the bottom and went off to pick more corn with his little girl on the back of the horse.

We stopped at the next farm where I was able to get some canning tomatoes that were just gorgeous from which I made some of my grandmothers Chili Sauce yesterday. I got a half bushel of the prettiest red tomatoes. All of the Amish families basically set their front porch up as a store, there are rows of vegetables, cupboards full of jams and jellies and candies. We even saw lye soap at one. I just loved all of the neatly cared for vegetable gardens in front of their homes. 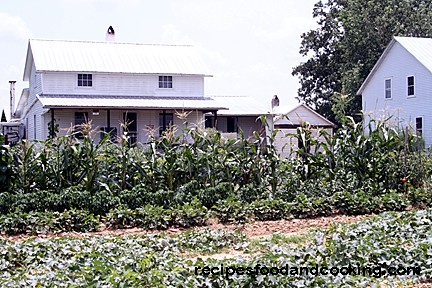 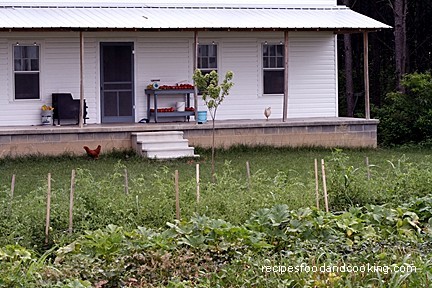 Moving on down the road we pulled into another farm where a barefoot boy of about 10 was standing at the vegetable table with a golden watermelon and a knife, eating it as fast as he could cut that juicy melon. Needless to say we bought one of those also for $1.50! He could of been a commercial for the watermelon board.

We spent about 3 hours going to different farms, and also brought home new baby potatoes, 10 lbs. of green beans for the freezer, some pole beans and a couple of heritage tomatoes. One of the last homes we drove by had the tallest corn I have ever seen. It was at least 8 ft. tall. It had started to cloud up a little as rain was on the way when I took the picture so it is a little dark.

Next we came to a little restaurant that had the best southern cooking. Lunch was served buffet style and there was fried chicken, green fried tomatoes, beans and cornbread, salads, and lusicious raspberry cobbler with ice cream. It was $15.00 for the both of us. The restaurant is behind a craft market on Hwy. 64.

All and all a very pleasant way to spend the day!