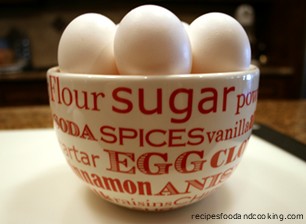 Here are some common terms you will see in recipes:

Cook until knife inserted near center comes out clean – Baked custard mixtures are done when a metal knife inserted off center comes out clean. The very center still may not be quite done, but the heat retained in the mixture will continue to cook it after removal from the oven. Cooking longer may result in a curdled and/or weeping custard. Cooking a shorter period may result in a thickened but not set custard.

Slightly beaten – Use a fork or whisk to beat eggs just until the yolks and whites are blended.

Well beaten – Use a mixer, blender, beater or whisk to beat eggs until they are light, frothy and evenly colored.

Thick and lemon-colored – Beat yolks at high speed with an electric mixer until they become a pastel yellow and form ribbons when the beater is lifted or they are dropped from a spoon, about 3 to 5 minutes. Although yolks can’t incorporate as much air as whites, this beating does create a foam and is important to airy concoctions such as sponge cakes.

Room temperature – Some recipes call for eggs to be at room temperature before eggs are to be combined with a fat and sugar. Cold eggs could harden the fat in such a recipe and the batter might become curdled. This could affect the texture of the finished product. Remove eggs from the refrigerator about 30 minutes before using them or put them in a bowl of warm water while assembling other ingredients. For all other recipes, however, use eggs straight from the refrigerator.

Many inexpensive egg separators are available. To separate, tap the midpoint of the egg sharply against a hard surface. Holding the egg over the bowl in which you want the whites, pull the halves apart gently. Let the yolk nestle into the cup like center of the separator and the white will drop through the slots into the bowl beneath.

Drop 1 egg white at a time into a cup or small bowl and then transfer it to the mixing bowl before separating another egg. This avoids the possibility of yolk from the last egg getting into several whites. Drop the yolk into another mixing bowl if needed in the recipe or into a storage container if not.

Add cream of tartar – Egg whites beat to greater volume than most other foods including whipping cream, but the air beaten into them can be lost quite easily. A stabilizing agent such as cream of tartar is added to the whites to make the foam more stable. Lemon juice works much the same way.

Add sugar, 1 to 2 tablespoons at a time – When making meringues and some cakes, sugar is slowly added to beaten egg whites. This serves to increase the stability of the foam. Sugar, however, can retard the foaming of the whites and must be added slowly so as not to decrease the volume. Beat the whites until foamy, then slowly beat in the sugar.

Stiff but not dry – Beat whites with a mixer, beater or whisk just until they no longer slip when the bowl is tilted. (A blender or food processor will not aerate them properly.) If egg whites are under beaten, the finished product may be heavier and less puffy than desired. If egg whites are over beaten, they may form clumps which are difficult to blend into other foods in the mixture and the finished product may lack volume.

Soft peaks or piles softly– Whites that have been beaten until high in volume but not beaten to the stiff peak stage. When beater is lifted, peaks will form and curl over slightly.

Gently folded – When combining beaten egg whites with other heavier mixtures, handle carefully so that the air beaten into the whites is not lost. It’s best to pour the heavier mixture onto the beaten egg whites. Then gradually combine the ingredients with a downward stroke into the bowl, across, up and over the mixture motion, using a spoon or rubber spatula. Come up through the center of the mixture about every three strokes and rotate the bowl as you are folding. Fold just until there are no streaks remaining in the mixture. Don’t stir because this will force air out of the egg whites. If you have a stand mixer, put the mixing bowl on the turntable for easier turning as you fold.

Curdling: Also known as syneresis or weeping. When egg mixtures such as custards or sauces are cooked too rapidly, the protein becomes overcoagulated and separates from the liquid leaving a mixture resembling fine curds and whey. If curdling has not progressed too far, it may sometimes be reversed by removing the mixture from the heat and stirring or beating vigorously.

To prevent syneresis or curdling, use a low temperature, stir, if appropriate for the recipe, and cool quickly by setting the pan in a bowl of ice or cold water and stirring for a few minutes.

The term curdling is usually used in connection with a stirred mixture such as custard sauce, while weeping or syneresis are more often used with reference to pie meringues or baked custards.

Information from the American Egg Board

A good way to save whites and yolks is to freeze them in an airtight container. The day before you plan to use them, thaw them overnight in the refrigerator. Yolks require a pinch of salt to keep them from gelling.

Whites can also be kept covered in the refrigerator for several days. Try freezing whites in an ice cube tray for easier measuring. Store in a airtight container after they have frozen.